While many amateur golfers on the mainland are deep in the throes of winter, the best players in the PGA are about to tee off in the first event of 2022. Since 1999, The Sentry Tournament of Champions has been viewed in primetime and played on the Island of Maui at the Kapalua Plantation Course, allowing golfers on the mainland to fantasize about warm breezes, green fairways, and beverage carts filled with ample adult beverages.

Trade winds dominate the weather pattern in many tropical locations and Kapalua is no different. Located on Maui’s  windward western slopes, wind speeds are frequently range from 10-15MPH from the ENE.  Almost every hole has the ocean visible offering very little in terms of protections from the wind. Temperatures this time of year range from the low 80’s during the day and drop into the middle 70s at night making for absolutely ideal temperatures on the course. 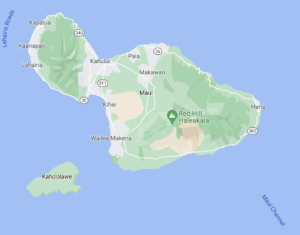 Like at many other coastal golf courses, winds offer the most protection from these professionals going low. In 2006, Stuart Appleby won his third TOC in a row with an 8 under par during extremely challenging conditions (winds >40mph) and in more recent history, Justin Thomas won a playoff in 2020 after a 4 round score of -14 while experiencing winds 20-30MPH and gusts exceeding 40mph.  While these scores would turn heads at many events, at Kapalua they are considered quite “bad”.  In fact, since 2010 the winner has been below -20 only 3 times, Justin Thomas in 2020, Dustin Johnson in a rain shortened 2013, and Zach Johnson shooting -19 in 2014.

While low scores are the norm at the TOC, some golfers have brought that to extremes. Jordan Spieth won in 2016 with a score of -30 and Ernie Els won the event in 2003 at -31 (both by 8 strokes).  Last year Harry English won with a final score of -25 with winds rarely exceeding 15mph.

How Will Weather Impact the 2022 Event?

With winds forecast to be light in 2022, I expect scores to approach the -25 that English posted last year. As for precipitation, the biggest threat looks to be during the early rounds on Thursday, but should be scattered and could even be the case where one side of the course is sunny while the other is getting a moderate burst of rain. This is not abnormal in tropical locations (I actually studied tropical rains in Grad School)

I Gamble…What Does This Mean for Me?

4 out of the last 11 TOC events have ended in a playoff.  With odds on Caesars of +333, I don’t hate this bet and historically these are pretty good odds, or at least better than the 20-1 odds for an albatross.  Take caution though, this course could also allow for a hot golfer to blow the field away such as Els and Spieth did in their incredible performances under similar conditions.  I lean towards playoff.

Though Jason Sobel is bullish on players who excel in the wind, with the current forecast it may be almost secondary. It will be a popular pick but I’m looking a Collin Morikawa (+1100) as my selection, with Xander Schauffele (+1400) and Patrick Reed (+2500)  rounding out my 3 picks for this event.  Who I DON’T like in this event is Koepka who never seems to play well in this event. Maybe if he was paired with Bryson he’d show up just to shove it in his face?