Warmer than historical average conditions are seemingly common place recently and October 2021 was no different. Overnight low temperatures were among some of the warmest in the past 120+ years in parts of the Northeast and Great Lakes. These warm overnight temperatures extended the grass growing season and decreased any chances of early season frost delays at northern courses.  After a record cold October 2020, these warm temperatures were welcomed in the Northern Plains where rounds played increased by more than 17% (source: Golf Datatech).  Golfers were feeling a Rocky Mountain high in the Front Range of Colorado where slightly warmer than average conditions, combined with less rainfall, extended the season.

Unlike temperature, precipitation was above normal across a large swath of the nation.  In fact, 11 states observed a top 10 wettest October. Due to warm/wet conditions, some courses in the northern tier may have had some of the best golfing conditions of the season. After a fantastic October in 2020, California experienced heavy rainfalls in 2021 which magnified the year-over-year decrease in rounds played (greater than 10% decrease in rounds played on the West Coast). Overshadowing any impact to golf was the slight improvement in drought conditions. States along the Southeastern Coast (including areas such as Myrtle Beach, Pinehurst, and Williamsburg) were generally drier than normal.  I can attest that in late September, Pinehurst was in pristine condition and I have nothing that makes me think it was anything less than perfect in October. 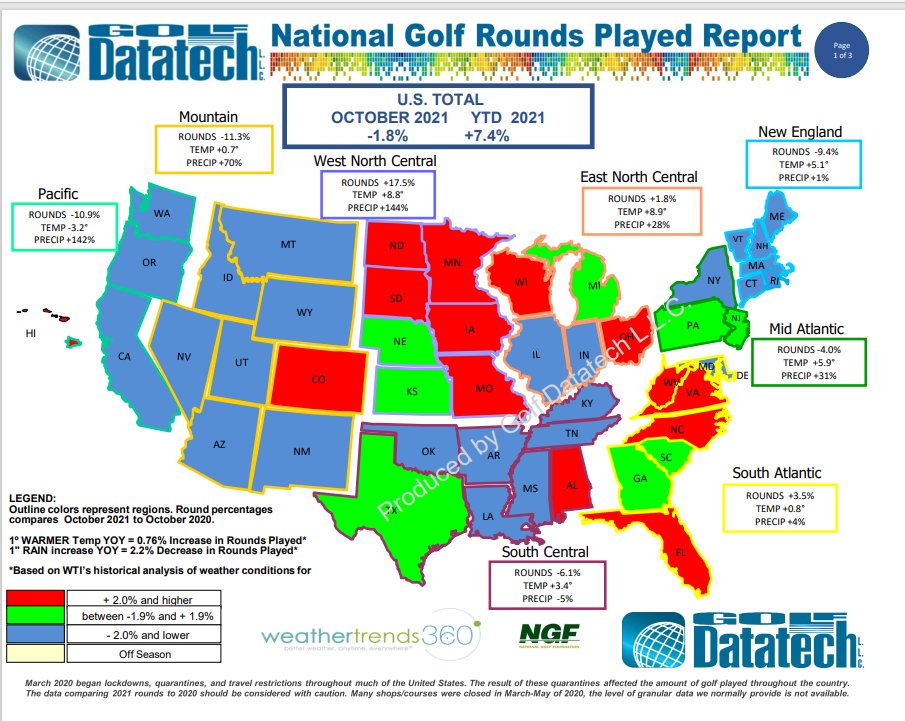